b-interaktive is a young development studio for mobile games and apps headquartered near Dortmund. It focuses on real-time social games which connect players all around the world — on all platforms and across all app stores.

In 2012, b-interaktive was planning to publish two classic board games in the form of multiplayer-capable versions and in more than 20 different languages. This required powerful IT infrastructure for the back end of the games which could be scaled globally.

The publishers chose Microsoft Azure Mobile Services, as they did not want to have to manage their own infrastructure, instead deciding to focus squarely on development. What eventually made them choose Azure was Microsoft’s personalized support and high-performance platform.

With Azure Mobile Services, developers can offer their games on Windows Phone 8, Windows 8.1, iOS, Android, and Fire OS. Multiplayer games can be distributed for all platforms at once, and Azure automatically scales as needed — worldwide.

‘Microsoft Azure offers us a scalable platform for our multiplayer games that grows together with us globally.’  – Eugen Barteska, Managing Director, b-interaktive

The gaming industry has undergone massive changes over the past few years: Elaborate games with million-dollar budgets for living room consoles now compete with minigames for smartphones.

‘The number of mobile devices is increasing rapidly: From 2012 to 2015, the number of app downloads will triple to 180,000 billion worldwide‘, reports Eugen Barteska, Managing Director of b-interaktive.  ‘We are now part of a vast global market.‘

The publishers of b-interaktive have been focusing on classic games since 2012, and offer these games for free with ads, or without ads for a small fee. Since then, b-interaktive has recorded 30 million downloads and caters to 3 million players each month. Dice Duel alone, known in Germany as Kniffel and probably the most popular dice game on the German market, has been played 1.5 million times. ‘These are the kind of figures we expect‘, explains Barteska. ‘After all, a year of work was spent on development in order to cater to the various platforms, namely Windows, Android and iOS.‘

Classic games which bring people together 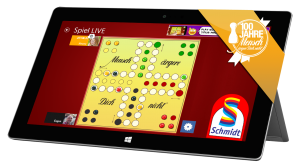 In 2012, b-interaktive took its next big step. They wanted to release the classic games Ludo LIVE and Checkers (Ger.: Dame) under the original Schmidt Spiele license — as multiplayer-capable versions which can also be played with friends or random players online. Both titles were to be translated into more than 20 languages to expand the business internationally. This required powerful IT infrastructure for the back end of the games which can be scaled quickly in the case of rapid growth, and which is also able to distribute the traffic to various locations around the world.

The solution provided by a global cloud provider was best able to fulfill these requirements. ‘We could also have rented a server in Frankfurt’, explains Barteska. ‘But setting up and maintaining a complex back end would have involved high costs and required one of our staff members to dedicate all his time to it.‘ The alternative was to use cloud services such as Microsoft Azure or Amazon Web Services. Ultimately, they chose Microsoft Azure Mobile Services. ‘We began using Azure extremely early on and had direct contact with the development team in the USA‘, reports Barteska. ‘We were continually working on optimizing the solution.‘

This collaboration continues to the present day. b-interaktive will soon complete a number of international titles and expects the amount of data traffic to double. Hence, b-interaktive has consciously decided to store the individualized player data in Microsoft Azure SQL. ‘As part of a workshop, we worked together with Microsoft to analyze hot spots in our database structure that could be potential bottlenecks‘, explains Barteska. In addition, Microsoft offers the MSDN & TechNet Support Hotline for developers, which provides help and advice concerning the development platform and Microsoft’s infrastructure technologies. If more complex problems are encountered, a partner team works to find a comprehensive solution. When this happens, Partner Business Evangelists — highly-skilled Microsoft specialists — are also involved. ‘There is always a Microsoft engineer available. There is no such personal contact with other cloud providers‘, says Barteska.

The future with multi- and cross-platform games

In addition, thanks to open interfaces, applications programmed in Microsoft Azure are compatible with all popular operating systems. ‘Under Azure, we use Node.js as a programming language, which is very efficient for us‘, reports Barteska. It allows developers to simultaneously offer their games on Windows Phone 8, iOS, Android, and Fire OS. These games also run on a Windows PC and can be controlled via a keyboard and mouse, touchscreen, or gamepad, as the player desires.

Cross-platform is also a hot topic in the gaming industry. b-interaktive has developed its own platform, b-live, which allows multiplayer games to be distributed in a platform-independent manner. This allows players, for example, to seamlessly continue a game they were just playing on a Windows PC or Xbox when on the road on their Android smartphone, and at the same time play with opponents on other platforms.

b-interaktive intends to grow its user base worldwide with the help of such features. The board game Checkers (Ger.: Dame) has been available in the corresponding app stores since mid-June 2013. Ludo LIVE has been available since early 2014. So far, both have been downloaded 3 million times.

At the beginning of January 2015, b-interaktive will be releasing Dice Duel (Ger.: Kniffel LIVE) — a version which allows Yahtzee to be played in a socially networked manner. This will be followed by a music quiz in February. ‘This quiz will definitely appeal to many players in Germany, the UK, USA, and Asia and more than double the number of our users in twelve months,’ predicts Barteska. ‘Subsequently, we can set up data centers in other regions of the world, and Azure Mobile Services will automatically take care of synchronization and replication to keep the data synchronized across servers. This will significantly facilitate our worldwide expansion.‘